AAM in Canada: Can it truly be zero-emission? 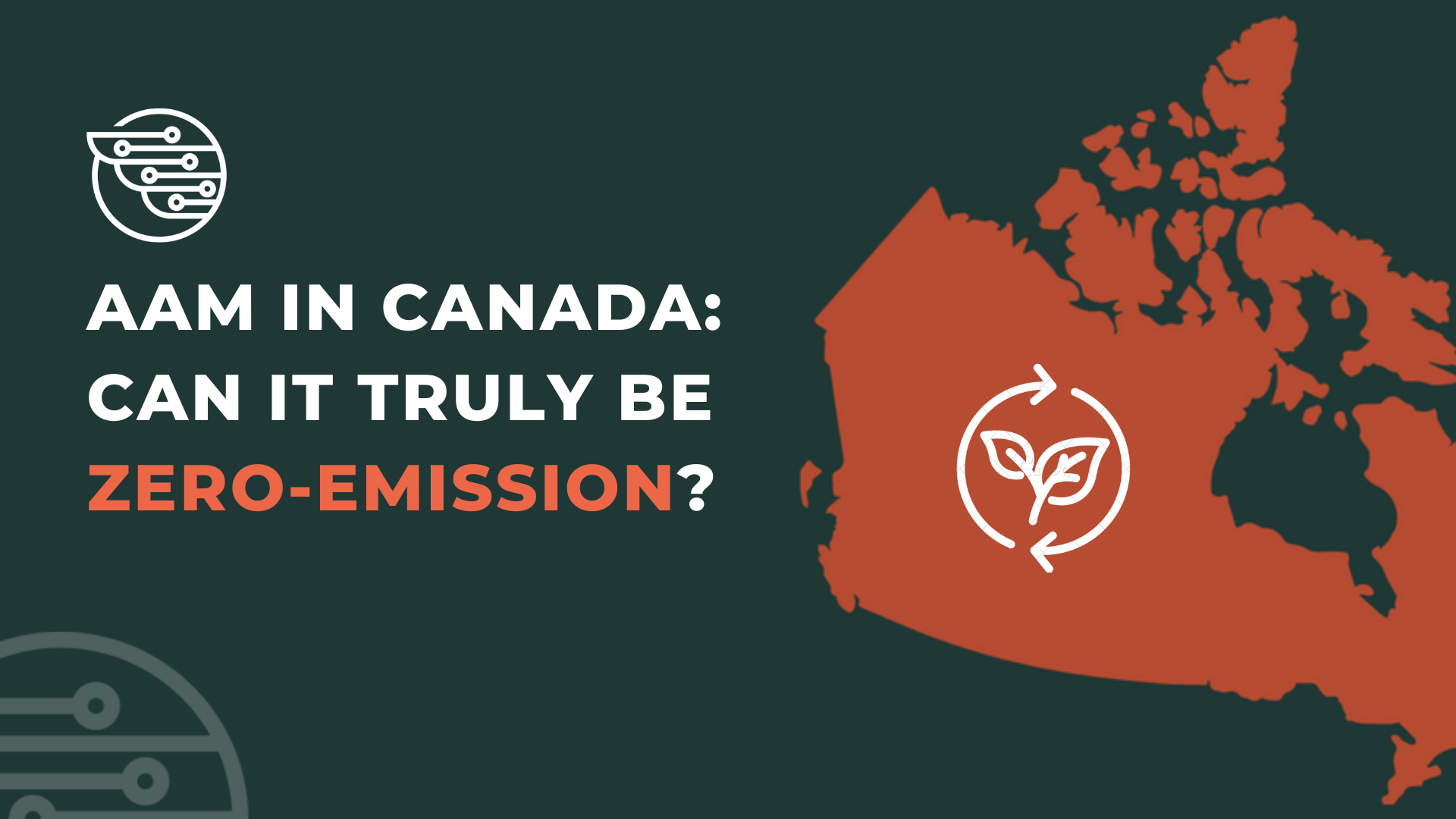 In the Electric batteries, hydrogen fuel cells, and fossil fuels: What will propel AAM?’s article, we’ve briefly mentioned how Canada is in an excellent position to have a zero-emission Advanced Air Mobility, AAM. But it’s worth exploring this matter a little more in-depth.

Yes, Canada is self-sufficient energy-wise. And according to the Canada 2022: Energy Police Review, a report produced by the International Energy Agency (IEA), the country exported 44% of its domestic-produced energy in 2020.

The fact that Canada produces more energy than it consumes is excellent news for AAM because it means the country can charge the aircraft without making considerable investments to scale its energy production.

It’s not that investment to scale the energy production is not needed, quite the opposite. As AAM becomes more popular and accessible, it will need more energy, and sooner than later, Canada will have to figure out a plan to match the energy consumption to production. However, that’s in the future. For now, knowing that the country has more energy than it consumes allows everyone in the AAM field to at least test the waters.

But that raises a serious question…

As mentioned in the Electric batteries, hydrogen fuel cells, and fossil fuels: What will propel AAM? article, an AAM aircraft can only be considered zero-emission if every step of the way is zero-emission. It’s not enough for the aircraft to be non-polluting; the energy that fuels them also has to be non-polluting. And regarding this, Canada is and isn’t doing enough.

Dr. Birol’s words sound like great news and unquestionably are exciting. But they hide an uncomfortable truth behind them because even though Canada has one of the cleanest energies in the world, the country still has a lot to do. As the report shows,

The largest energy source in Canada was gas in 2020, covering 39% of TES [Total Energy Supply]. Oil immediately followed at 33%, before hydro (12%), nuclear (8.9%) and coal (3.7%). Bioenergy and waste is the second-largest renewable energy source in the country’s TES after hydro, at 4.6% in 2020, while other renewables, mainly wind and solar, are growing fast but still together only accounted for 1.2% of TES in 2019.

And the report demonstrates that at least Canada is on the right track,

It’s significant to see the growth in renewable energy, but it’s more meaningful to observe the decrease in the utilization of fossil fuels. And that raises one more serious question…

What does “green energy” mean for Canada?

Or even better, because we all know that “green energy” means renewable sources and nuclear, “Where is Canada investing?”

The IEA report answers the above question in two statements. First, in the Honourable Jonathan Wilkinson’s foreword,

We have committed more than $100 billion toward climate action and clean growth since 2015, including major investments in clean power, energy efficiency, industrial decarbonization, clean technology and transportation. We also have a world-leading price on pollution and action plans for promising technologies like hydrogen and small modular reactors.

Canada also identifies a significant opportunity to leverage regional advantages to increase the penetration of both hydro and variable renewables through the buildout of interprovincial interconnections. Strengthening interprovincial connectivity offers considerable upside to allowing fossil fuel-dependent provinces to decarbonize and electrify their economies.

So it’s safe to say that Canada is investing in already existing and reliable hydro while also heavily investing in new and promising technologies such as hydrogen and small nuclear modular reactors.

So, can AAM in Canada be truly zero-emission?

If the Honourable Wilkinson is right, not only AAM in Canada can truly be zero-emission, but there’s even a date for this to happen,

Our Government recently committed to new measures to accelerate the clean energy transition, including requiring the oil and gas sector to be net-zero by 2050 and setting interim five-year targets; requiring oil and gas companies to reduce methane emissions by at least 75 percent below 2012 levels by 2030; creating a 100-percent net-zero electricity system by 2035…

With a 100% zero-emission electricity system, massive investments in green hydrogen production, and retrofitted and brand new electric & hydrogen aircraft, the AAM future looks greener and brighter than ever.

If 2035 looks too far away, click here to know what is happening today in the AAM world. 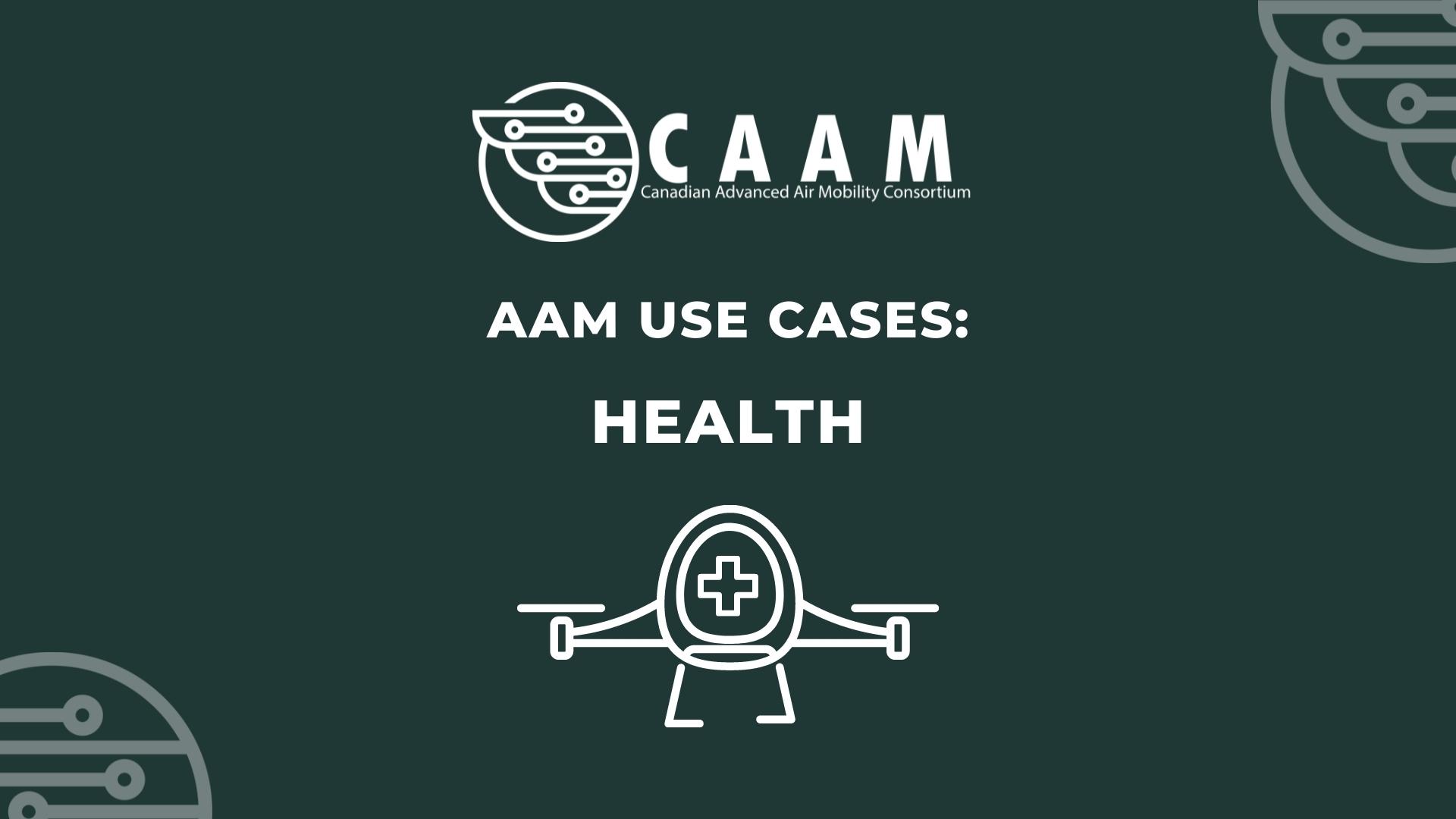 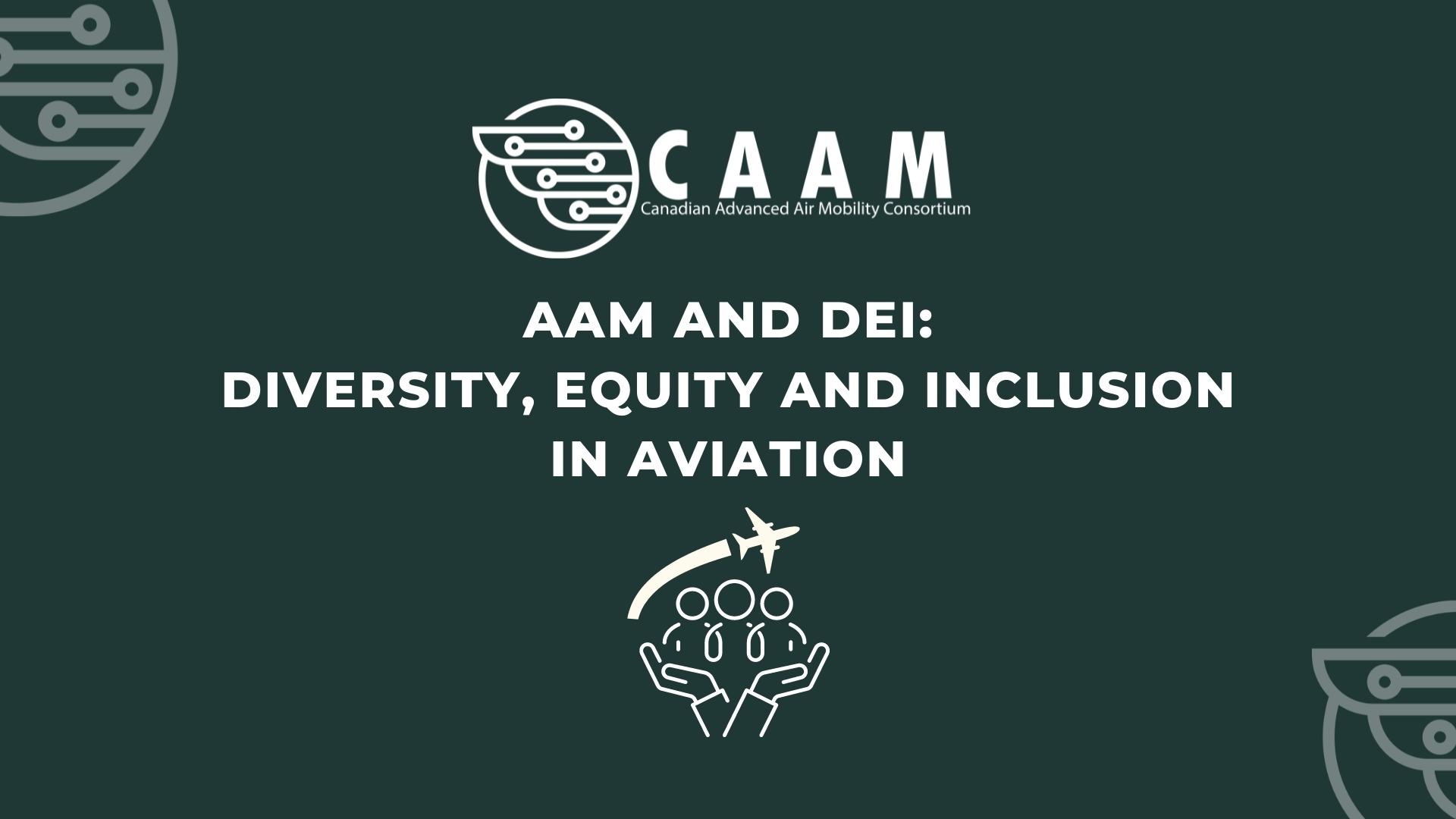 AAM and DEI: Diversity, equity, and inclusion in aviation

There needs to be diversity, equity, and inclusion (DEI) for Advanced Air Mobility to be successful. As University of Michigan Aerospace Professor Ella Atkins writes, “Suppose we have matured the necessary autonomy and data management technologies to realize one cloud (information access for all AAM users) and one sky (integrated airspace access for all AAM users). We must then address new challenges in equitable airspace allocation and social impact.” But is waiting for technology the best course of action, or should aviation take action on DEI today? What does equity look like right now in aviation? The 2019 Women in […] 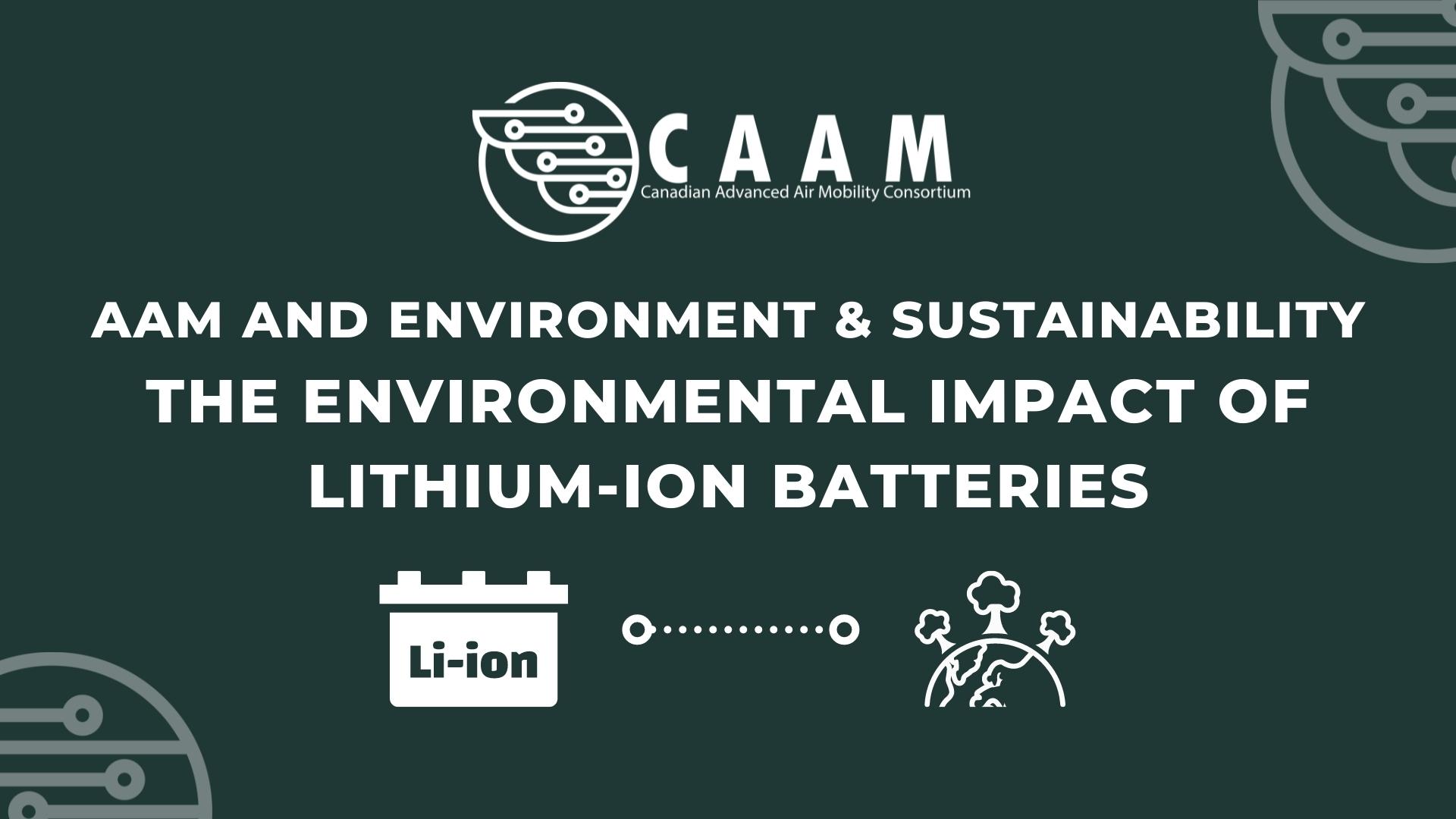 AAM and Environment & Sustainability: The environmental impact of lithium-ion batteries

The Canadian Advanced Air Mobility Consortium (CAAM) has an agenda. An environmentally-friendly and sustainable agenda, but an agenda nonetheless. This article is about CAAM confronting reality while trying to find answers on how to lessen the environmental impact of lithium-ion batteries. AAM and Environment & Sustainability: The environmental and social impacts of lithium-ion batteries Like many other batteries, the lithium-ion cells that power most electric vehicles rely on raw materials — like cobalt, lithium and rare earth elements — that have been linked to grave environmental and human rights concerns. Cobalt has been especially problematic. Mining cobalt produces hazardous tailings […]